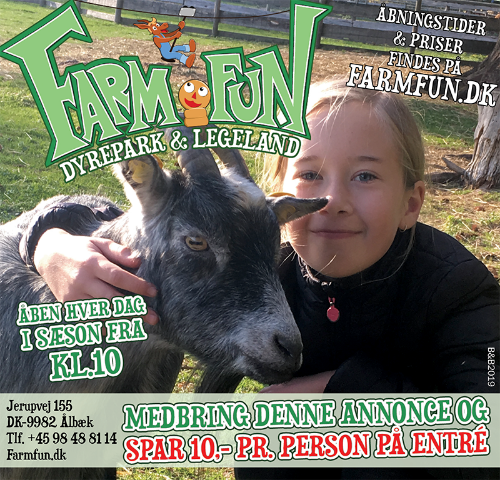 A museum full of memories and bad taste
Oh! It is indeed not something that many have on display anymore. But today they are an attraction. More than 3,000 items are on display in the souvenirmuseum: Souvenariet in the Old Arts Building bellow Tranekær Castle on Nordlangeland. That is the good, old souvenirs in the traditional sense, it conserns. The souvenir that virtually all despise and love at the same time. Since time immemorial, souvenirs were bought by the millions worldwide. They have been dragged home - not least in the 50s and 60s and 70s, where charter tourism really got started.

Started as a holiday joke
One could simply not return to the daily grind without bringing just a bit of holiday adventure with you home. And that happens still, but to a lesser extent. And through the years many of the funny and touching old souvenirs were hurled out. Nowadays - and supposedtly also back then – considered as bad taste. But Souvenariet has through 10 years created a gigantic and colorful collection for pleasure and amusement for thousands of guests whom often contributed to the assembly with their souvenirs, many of whom have been very, very old. That way you can follow souvenirs historical development.

The man behind the unusual museum is a journalist Hans Rossen: The idea for the museum, I got in Berlingske Tidende in 1991 when I was editor of the Living section. The newspaper had a summer joke, where readers could send photos of their home brought horrors and we showed the on the last page in the paper. It was a huge success, and the newspaper received about. 600 letters through the three weeks the joke went on. Therefore I thought that when people think they are so funny to watch, then they can also be put on display. No one else had thought of that idear - in the whole wide world? So I started a systematic purchase of souvenirs from various flea markets - and the worse souvenir the better, explains Hans Rossen.

Celebrity horrors exhibited
Among well-known contributors are GNAGS singer, Peter AG Nielsen, who has donated Souvenariet a New-Yorker-shirt completely dominated by New York's skyscrapers. He bought it when he stayed over there to write lyrics for the CD "Beauty Spots". Earlier, TV2's presenter, Jes Dorph-Petersen loaned the museum a very special "souvenir", namely a plastic piece with the name "Toyota" from ulykkesbil which belonged Blekingegade gang. Stump he found at the scene of his first reportagetur for TV2.

The banned souvenirs
In 2011, Souvenariet a special exhibition with forbidden souvenirs by Danish customs officers involved. It's souvenirs made from endangered species and now exhibited in collaboration with the Forest and Nature Agency as a deterrent, since falling heavy fines for bringing home the kind. Largest ever fine to 90,000 DKK

Visit horror cabinet
To visit Souvenariet, you need a ride to Tranekær on Langeland. Souvenariet lies in the gl. Theatre Building, listed in 1800 and in itself worth a visit. The theater building has in the years of 1800-1812 was included acting and singing opera - even the count, Frederick Ahlefeldt, called "The General", even as a singer. It is said that the Count had a good voice and he has among other things, lots of Mozart's operas. Are you curious, or would you just hand over a hideous vase from loyal trip to Mallorca, contact Souvenariet.

Be sure to use some of the many lovely accommodations and Bed and Breakfast places that are on Langeland, Tåsinge and in Svendborg. South Fyn is so great and you could quite easily spend a weekend exploring the area.