The Wadden Sea is a part of the world's largest coherent tidal area. Two times a day, 1 billion m3 water flows through, in and out of the Wadden Sea through the deeps between the Wadden Sea Islands - Rømø, Mandø, Fanø and the half island Skallingen. About 12 million waders, geese, and ducks stops by the Wadden Sea every year during their migration between the breeding areas north and the overwintering spots south. A range of tourist operators in the area arranges guided tours with exciting themes such as oyster picking, black sun, hiking trips to Mandø and Langli, seal safari and much more.

Oyster picking
If you would like a fun and different experience, join a guided tour of oyster safari. In these trips, the tidal is in charge, and you will get to a place where sky and ocean becomes one. In some cases, you can find the culinary pearls yourself, but it is also possible to get a guided tour with the good spots. Please note that eating oysters found in the Wadden Sea, whether by yourself or on a guided tour, is at your own risk.

Black Sun
Another amazing experience by the Wadden Sea is "black sun". Black sun can be watched in two periods throughout the year. The first period is in the spring, when the common starlings are moving south. This period last from February to the middle of April. Second period is in the autumn - from August and sometimes as long as until December - when the waders are moving south for the winter.

There can be from 20 thousand up to 1,2 million birds in one whole flock - if you are at the right place at the right time. If you are lucky, you will have a unique experience watching the beautiful bird formations in the sky.

Fanø, Langli, Mandø, og Rømø
If you consider visiting the Wadden Sea, a visit to one of these four islands is definitely worth your time. They are all completely different, and you will feel like being in another world, when you get there.

Fanø you can get to by taking the ferry from Esbjerg. The trip takes about 12 minutes. At Fanø, you will find wide sand beaches, a magnificent bird life and a special culture. Langli was populated from 1548 to 1911. Today, Langli is a bird sanctuary, where all hunting and traffic is prohibited - except in the periode July 16 to September 15, where you are allowed to visit the island. From Nyeng by Ho, it will take about 1,5 hour to go by the low tide road to the island. Before you choose to go by yourself, please check weather conditions and the tidal water, so you can avoid unpleasant surprises on your trip. You can also get to the island with a tractor bus from Ho, and get a guided tour.

Mandø is a paradise for nature lovers, who wants to enjoy the bird and animal life. At Mandø, the traffic between the island and the mainland is stopped twice a day - by the tidal water. Mandø has its own circadian rhythm, which characterizes the 35 inhabitants of the island. You can get to the island with tractor bus or by simply driving yourself. Like with Langli - please check weather and tidal water conditions before going on your own. The 9 kilometers long Rømø dam leads directly to the Wadden Sea's largest island - which has a completely different nature than we are used to at the mainland - Rømø. Rømø's up to 3 kilometers wide sand beach is the biggest magnet of the island, and here there is room for everyone. Do not miss the plantation either - with hills and bunkers, the dune moor with beautiful parabola dunes.

Seal Safari
Experience one of Denmark's largest predators at close range - the spotted seal. If you want to watch Danish seals by the Wadden Sea, you should have a good chance of finding them. There are two ways to go on a seal safari - you can go on a guided tour with a nature counselor or go by tractor bus. In both cases, you will be guided to the areas, where seals are most likely to find, and get funny facts and histories about the beautiful animal. Maybe you are lucky enough to get one of the most curious seals close - right in the water in front of you… 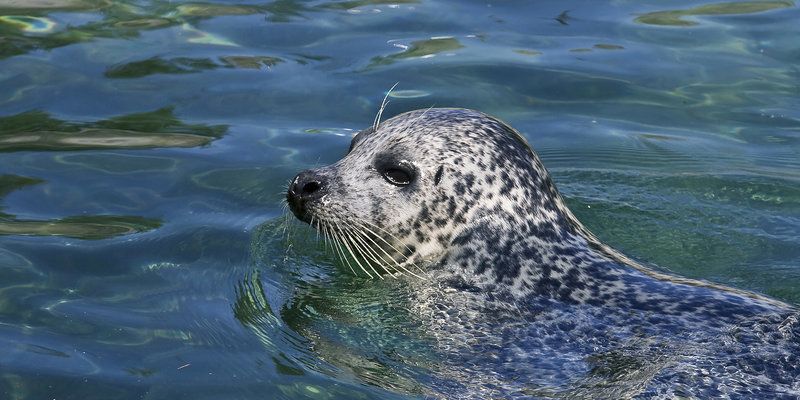