Britta Persson was born in Aarhus, but grew up in Odense. She got married and had two beautiful children. And Britta moved into the old four-story farm in Davinde. In 2011, Britta decided to establish an accommodation and she build a guest annex in a former barn building. Britta furnished two lovely large and cozy rooms with private kitchen and bath. Britta simply wanted to get some work to do. She had a dream - to meet new people and get some more life into the old farm. That is now eight years ago...

I enjoy being able to get up every day and have something I know I have to do, says Britta. And she enjoys the many, pleasant visits of guests, who finds their way to Davinde. Britta is married to Uffe, who among other things is an art painter, and who exhibits his paintings in the gallery, which is situated in one of the large forer stables on the fourwinged farm. But not just that. The couple arranges exhibitions with changing artists in the gallery, which is open all weekends, and where you as visitor can enjoy a cup of coffee with cake - or a nice glass of wine.

Uffe loves, like Britta, to have guests visiting. Uffe is a great storyteller, and he organizes trips around the area for guests - including story telling about Sanderumgaard that is situated close by - with the almost 200 year old and 15 acres large historic manor house garden  that is open to the public. Uffe is excited about the lake in Davinde with sea eagles - and Egeskov Castle - yes, everything that happens or have to do with Funen.

My guests are thrilled to be visiting us on this beautiful old farm, says Britta. They say it’s like stepping into a backdrop of a  movie.

In the middle of the courtyard stands a century-old walnut tree that bears plenty of fruit. So many walnuts that Britta happily hands them out to all the guests, who wants it. So guests leave often with a big bag of walnuts for the further journey.

When you sit on the bench in front of the main house and enjoy the huge paved courtyard, it feels like you have step into the previous century. You can vividly imagine the life that at that time played out on the farm with milking girls, the sound of the animals standing in the stables and the horse carriages rolling over the stones in the courtyard.

It is Britta, who serves breakfast, when guests wake up in the annex and goes over to the farmhouse to enjoy. It is also Britta who cares for the huge garden with pavillion, and the many, many beautiful pots of flowers that stand and decorate everywhere. Around the grounds, guests will find countless patios, where they can settle down and enjoy themselves. There is plenty of room for play and games in the large garden.

Every year, Britta has a big project she starts. Last year, the farmhouse was painted and renovated. This year it is the exhibition stable, containing the gallery, that needs to be repaired and painted. There is plenty to do. Britta’s son comments on her diligence with the words: Its because you are not able to sit still, mom. You stay young, by always doing something.

Brittas Bed and Breakfast is open all year - with one exception: At the front gate by the driveway to the courtyard is a town rally - with an old cream puff tree, as Britta calls it. That tree is trimmed once a year when all Davinde’s farm owners show up. This year, Britta is the senior man. And with the title also follows the duty of serving dinner for the 17 men who trims the tree.

The menu is certain: During the meal, beer and schnapps is served. For starters, there is pickled herring with the first potatoes and butter. Then follows a piece of rye bread with fried steak and eggs. Then the sandwiches ad libitum. For dessert, cheese, coffee and cognac is served. So Britta has seen herself forced to stay closed this one day of the year - where the town convention tree must be cut.

Brittas Bed and Breakfast is a nice and cozy accommodation located just 14 kilometers from the center of Odense. In a short time you are in the middle of the city, with all the experiences you will find there, but also central to all experiences throughout Funen. 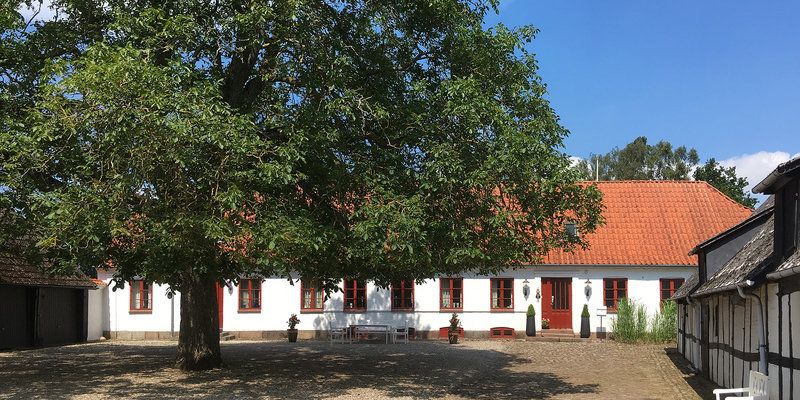